This paper describes the procedure for creating and verifying a thermomechanical FEM model of orthogonal cutting processes as well as the results obtained with this model. To verify the model, the temperature was measured in the secondary shear zone and at the exterior surface of the chip, which was analytically estimated as well and compared with the experimental values. In addition, the resultant forces and the chip compression ratio were determined as further characteristic machining variables. The course of the obtained results is explained using the correlation between the capacity produced by the heat source and its retention period in the temperature range under consideration. Finally, the values for temperature, resultant forces and chip compression ratio as attained by experiment are compared with those calculated with the FEM cutting model. 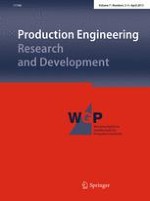 Investigations of the shear behaviour of aluminium alloys

Environment sensing for the creation of work cell models