Mining development sites occasionally host complicated aquifer systems with notable connections to natural surface water (SW) bodies. A low-altitude thermal infrared (TIR) imaging survey was conducted to identify hydraulic connections between aquifers and rivers and to map spatial surface temperature patterns along the subarctic rivers in the proximity of the Hannukainen mining development area, northern Finland. In addition to TIR data, stable isotopic compositions (δ 18O, δD) and dissolved silica concentrations were used as tracers to verify the observed groundwater (GW) discharge into the river system. Based on the TIR survey, notable GW discharge into the main river channel and its tributaries (61 km altogether) was observed and over 500 GW discharge sites were located. On the basis of the survey, the longitudinal temperature patterns of the studied rivers were found to be highly variable. Hydrological and hydrogeological information is crucial in planning and siting essential mining operations, such as tailing areas, in order to prevent any undesirable environmental impacts. The observed notable GW discharge was taken into consideration in the planning of the Hannukainen mining development area. The results of this study support the use of TIR imagery in GW–SW interaction and environmental studies in extensive and remote areas with special concerns for water-related issues but lacking the baseline research. 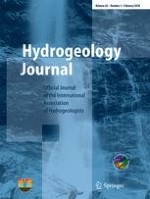 Solute transport along a single fracture in a porous rock: a simple analytical solution and its extension for modeling velocity dispersion