In order to identify suitable Trichogramma strains for mass production and successful control of key lepidopteran pests in paddy fields in the Greater Mekong Subregion, the effects of high temperatures on wasp life history traits were compared among three strains of Trichogramma chilonis Ishii and two strains of Trichogramma ostriniae Pang et Chen, collected from paddy fields in the region. At a rearing temperature of 25 °C, life history traits differed significantly among the five strains tested and the three T. chilonis strains and a T. ostriniae strain were of high performance. When female wasps were exposed to higher temperatures commonly encountered in the region, negative effects were observed on key life history parameters of adult females and their offspring at 34 °C, which became even more serious at 37 °C. In particular, the two T. ostriniae strains were not able to successfully develop to adulthood at all at 37 °C while for the T. chilonis strains adult emergence was significantly reduced. In addition, the emerged offspring females lived only around one day and no parasitism was observed. When the three T. chilonis strains were exposed to 37 °C for 4 to 12 h at prepupal and pupal stages, reflecting heat shocks that the released Trichogramma may experience in the field, adult emergence was significantly reduced after an exposure time of 12 h. In summary, the three T. chilonis strains show a relatively high potential for incorporation in a biological control program in the target region. Our results also highlight that tests at both rearing and field temperatures are necessary in selection of potential Trichogramma strains for an inundative release program where there is significant difference between rearing and field temperatures. 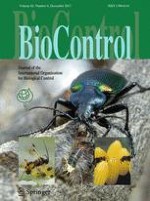