During operation of high power electronic chips the topside metallization is subjected to cyclic compressive and tensile stresses leading to unwanted thermo-mechanical fatigue of the metallization layer. The stress is caused by the difference in the thermal expansion coefficients of the metallization and the semiconductor underneath that can lead to a severe structural degradation of the layer changing the electrical characteristics of the electronic chips, finally causing a failure. Although this problem is well-known, the underlying physical mechanisms governing this fatigue phenomenon are not yet fully understood. In this work, we investigate the microstructural evolution of an Al metallization on high power diode chips subjected to passive thermal cycling between \(20\) and \(100\,^{ \circ } {\text{C}}\). The texture of the Al film is analyzed ex-situ by a combination of electron backscatter diffraction and X-ray diffraction. It is found that the initial dominating (111) orientation of Al grains in the film changes towards a (311) texture as the number of cycles increases. A simple model explaining the driving mechanism behind the crystallographic re-orientation is proposed. Also, large orientation gradients within individual grains are found to arise during thermal cycling, which results in sub-grain formation. These processes are the dominant mechanism for the degradation of the Al layer structure leading to the formation of voids and significant increase of the surface roughness. 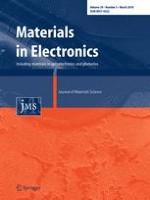