A transient three-dimensional model has been proposed to investigate the oxygen transport behavior in electroslag remelting process. The electromagnetism, heat transfer, multiphase flow, and species transport were calculated simultaneously by finite volume method. The volume of fluid approach was adopted to trace the metal–slag–air three-phase flow. Based on the necessary thermodynamics of oxygen transport behavior, a kinetic model was established to predict the mass source terms in species transport equation. The kinetic correction factor was proposed to account for the effect of the oxide scale formed on the electrode on the FeO content in slag. Finally, the effect of applied current on the oxygen transfer was studied. The predicted result agrees well with the measured data when the kinetic correction factor is set to be 0.5. The temperature distribution that affects the thermodynamics differs at the interfaces. The oxygen in air is absorbed into slag due to the oxidation at the slag/air interface. The Fe2O3 in slag and the oxide scale contribute to the increase of FeO content in slag, and the latter one plays the leading role. The oxygen transfer from slag to metal mainly occurs during the formation of the droplet at the slag/metal droplet interface. With the current increasing from 1200 to 1800 A, the oxygen content increases from 76.4 to 89.8 ppm, and then slightly declines to 89.2 ppm when the current increases to 2100 A. 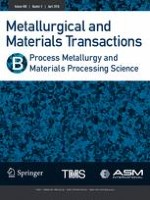 An Integrated Study on the Evolution of Inclusions in EH36 Shipbuilding Steel with Mg Addition: From Casting to Welding