Knots and the orientation of fibres in timber are decisive for the stiffness and strength of boards. Due to large property variations between members, strength grading is necessary. High resolution information of the orientation of fibres, both on surfaces and within members, would enable development of more accurate grading methods than those available today. A step towards three-dimensional (3D) models of the fibre orientation of the entire board volume is the establishment of 3D knot models based on scanning. The light from a dot laser illuminating the surface of a softwood board will, due to the tracheid effect, spread more along the fibres than across resulting in the dot entering an elliptical shape. In this investigation both the shape of the ellipse and the direction of its major axis were used to estimate the 3D fibre orientation on board surfaces. Knot surfaces were identified where the angle between the estimated 3D fibre direction and an approximated direction of the board’s pith exceeded a threshold value. By means of algorithms based on polar coordinates, knot surfaces which belonged to the same physical knot visible on different sides of the board were identified and as a result the position, orientation and volume of each knot were determined. Based on this information, a more accurate position of the board’s pith along the board was calculated. The established models showed good agreement with physical boards. The models constitute a promising starting point for further development of strength grading methods based on tracheid-effect scanning. 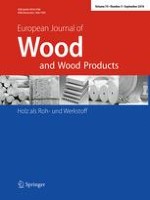 Remedial boron treatment of difficult to access timber in buildings

Utilization of recycled wood in biorefineries: preliminary results of steam explosion and ethanol/water organosolv pulping without a catalyst