A custom built reusable cell for in situ lithiation and mechanical deformation studies while in an X-ray tomograph was demonstrated, and the strain and volume changes of a composite graphite anode were computed from 3D X-ray microcomputed tomography data via Digital Volume Correlation (DVC). The test anode was a composite electrode comprised of a porous compliant matrix, graphite as the Li+ host material, 5-μm ZrO2 marker particles for use with DVC, and active carbon black to enhance electrical conductivity. The composite electrodes were hot-pressed to control their porosity, and in turn the mechanical integrity of the resulting material. This composite anode was included in a half-cell and lithiated in situ while in a tomograph, and intermittent 3D data were collected at different lithiation levels up to full gravimetric capacity. Strain measurements by DVC demonstrated relatively uniform expansion of the freestanding electrode with average normal strains in the three directions varying by 20%, while the internal shear strains were found to be negligible. The average experimental strains were about 75% of the theoretical value, as estimated by the rule of mixtures, which implies that ~25% of the normal strains in graphite, due to lithiation, are accommodated by the surrounding matrix. 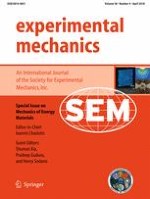 Characterization of Stress-Diffusion Coupling in Lithiated Germanium by Nanoindentation