A three-dimensional suction flow control study was performed to investigate the aerodynamic characteristics of a rectangular wing with a NACA 0012 airfoil section. In addition, the optimum suction jet length was determined. In this study, the Reynolds-averaged Navier–Stokes equations were employed in conjunction with a k–ω SST turbulent model. Perpendicular suction was applied at the leading edge of the wing’s upper surface, with two different types of slot distributions: i.e., center suction and tip suction. The suction jet lengths were varied by 0.25–2 of the chord length, and the jet velocity was selected to be 0.5 times the freestream velocity. Most importantly, in both cases, the results indicated that the lift-to-drag ratio increased as the suction jet length rose. However, the improvement in aerodynamic characteristics was more pronounced with center suction, and these characteristics were extremely close to those of the case considering suction over the entire wing such that the jet length was equal to wingspan. Moreover, in the center suction case, vortexes frequently abated or moved downstream. Interestingly, under similar conditions, a greater number of vortexes were removed with center suction than with tip suction. Ultimately, when the jet length is less than half the wingspan, tip suction is the better of the two alternatives, and when the jet length is greater than half the wingspan, center suction is better suited. 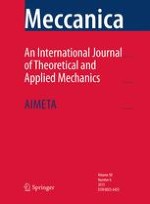 RETRACTED ARTICLE: Correlated fracture precursors in rocks and cement based materials under stress

RETRACTED ARTICLE: Is the Shroud of Turin in relation to the Old Jerusalem historical earthquake?