Interactions in many real-world phenomena can be explained by a strong hierarchical structure. Typically, this structure or ranking is not known; instead we only have observed outcomes of the interactions, and the goal is to infer the hierarchy from these observations. Discovering a hierarchy in the context of directed networks can be formulated as follows: given a graph, partition vertices into levels such that, ideally, there are only edges from upper levels to lower levels. The ideal case can only happen if the graph is acyclic. Consequently, in practice we have to introduce a penalty function that penalizes edges violating the hierarchy. A practical variant for such penalty is agony, where each violating edge is penalized based on the severity of the violation. Hierarchy minimizing agony can be discovered in

time, and much faster in practice. In this paper we introduce several extensions to agony. We extend the definition for weighted graphs and allow a cardinality constraint that limits the number of levels. While, these are conceptually trivial extensions, current algorithms cannot handle them, nor they can be easily extended. We solve the problem by showing the connection to the capacitated circulation problem, and we demonstrate that we can compute the exact solution fast in practice for large datasets. We also introduce a provably fast heuristic algorithm that produces rankings with competitive scores. In addition, we show that we can compute agony in polynomial time for any convex penalty, and, to complete the picture, we show that minimizing hierarchy with any concave penalty is an NP-hard problem. 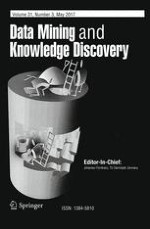 On searching and indexing sequences of temporal intervals

The great time series classification bake off: a review and experimental evaluation of recent algorithmic advances

On classifier behavior in the presence of mislabeling noise