In modern cryptography, a secret sharing scheme is an important cryptographic primitive. In particular, Krawczyk proposed a computational secret sharing (CSS) scheme, which is a practical, simple secret sharing scheme. In this paper, we focus on a CSS scheme with timed-release functionality, which we call a timed-release computational secret sharing (TR-CSS) scheme. In TR-CSS, participants more than or equal to a threshold number can reconstruct a secret by using their shares only when the time specified by a dealer has come. Our main purpose is to realize a TR-CSS scheme in a generic and efficient way in terms of the share size. Specifically, we first introduce a model and formalization of security of TR-CSS. In addition, we propose two kinds of constructions of TR-CSS: the first one is a simple and generic construction starting from an identity-based key encapsulation mechanism (IB-KEM); the second one, which is a more efficient construction than the first one, is built using a specific IB-KEM as the underlying IB-KEM. As a result, we can regard TR-CSS as a natural extension of Krawczyk’s CSS in terms of both a model and constructions, and we finally succeed to add timed-release functionality to Krawczyk’s CSS with small overhead, which is almost optimal. Moreover, our proposal of TR-CSS is important for constructing threshold encryption and multiple encryption with timed-release functionality in a generic and efficient way. Dodis and Katz showed (i) a simple and generic construction of threshold encryption from multiple encryption; and (ii) a simple, elegant and generic construction of multiple encryption. By using TR-CSS, we can effectively apply the Dodis–Katz paradigm even in the context of timed-release security. 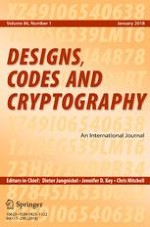 On the asymptotic complexity of solving LWE