Early arrival at breeding grounds have important fitness consequences for migratory birds, both at individual and population level. The aim of this study was to investigate how the timing of arrival at the breeding territories affects the spatial patterns of reproductive success within a population of white storks (Ciconia ciconia). Data were gathered annually for ca. 200 pairs of storks breeding in central Poland between 1994 and 2011. Geostatistical analysis of data indicated that in years of delayed arrival of the population (measured by the first quartile arrival date), the reproductive output of storks was negatively autocorrelated, which indicated that there was a tendency for pairs of high breeding success to neighbour with pairs of low success. By contrast, in years when first storks returned in early dates to the breeding grounds, their reproductive success did not show any kind of spatial autocorrelation. These results suggest that delayed return of the first-arriving storks of the population may increase intensity of intra-specific competition to the level at which high-quality breeding pairs monopolize most of available resources at the expense of neighbouring low-quality pairs, which have lower reproductive success as a consequence. Such hypothesis was further supported with the analysis of nesting densities, showing that the late-arriving breeding pairs incurred greater fitness costs (or derived lower fitness benefits) while breeding in high densities comparatively to the early-arriving conspecifics. 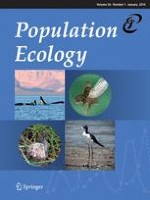 Happily together forever: temporal variation in spatial patterns and complete lack of territoriality in a promiscuous rodent