To Blow or Not to Blow the Whistle: The Role of Rationalization in the Perceived Seriousness of Threats and Wrongdoing | springerprofessional.de Skip to main content
SUCHE MENÜ 1 2 3 4

Whistleblowers who need to decide whether or not they should report wrongdoing usually experience several anxieties and pressures before making a final decision. As whistleblowers continue to attract the attention of a wide range of stakeholders, more research is necessary to understand the effects of the perceived seriousness of threats (PST) and perceived seriousness of wrongdoing (PSW), as well as the effect of the rationalization process on the intention to blow the whistle. We make the original proposal that the rationalization process can affect how PST and PSW trigger whistleblowing intentions. We tested our model using employees of tax offices operating in an emerging economy. We suggest several research findings, which can be summarized as follows: (i) PST reduces individuals’ intention to blow the whistle. That is, the greater the threat perceived by whistleblowers, the higher the likelihood they will choose to remain silent; (ii) we find evidence of a positive relationship between PSW and whistleblowing intention, whereby PSW increases individuals’ intention to blow the whistle. That is, the more serious the wrongdoing perceived by potential whistleblowers, the more likely they are to choose to blow the whistle; and (iii) we find evidence of the important role of rationalization in moderating the relationships between PST, PSW, and whistleblowing intention. The implications of these findings for business ethics scholars, managers, and end-users interested in whistleblowing are also presented.
Anzeige
Vorheriger Artikel Powering Sustainable Consumption: The Roles of Green Consumption Values and Power Distance Belief
Nächster Artikel Managing Conflict of Interests in Professional Accounting Firms: A Research Synthesis

Titel
To Blow or Not to Blow the Whistle: The Role of Rationalization in the Perceived Seriousness of Threats and Wrongdoing
verfasst von
Hengky Latan
Charbel Jose Chiappetta Jabbour
Ana Beatriz Lopes de Sousa Jabbour 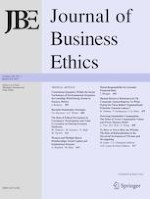 Women and Multiple Board Memberships: Social Capital and Institutional Pressure

The Impact of Proximity on Consumer Fair Trade Engagement and Purchasing Behavior: The Moderating Role of Empathic Concern and Hypocrisy