The aim of this study was to synthesize hydrophobic cellulose nanofibers (CNFs) using different chemical treatments including polymer and molecular grafting. For polymer grafting, immobilizing poly (butyl acrylate) (PBA) and poly (methyl methacrylate) (PMMA) on CNFs were implemented by the free radical method. Also, acetyl groups were introduced directly onto the CNFs surface by acetic anhydride for molecular grafting. The gravimetric and X-ray photoelectron spectroscopy analysis showed the high grafting density of PMMA on the surface of CNFs. AFM results revealed that molecular grafting created non-uniformity on the CNFs surface, as compared to polymer brushes. In addition, thermodynamic work of adhesion and work of cohesion for the modified CNFs were reduced in water and diiodomethane solvents. Dispersion factor was studied to indicate the dispersibility of CNFs in polar and non-polar media. Dispersion energy was reduced after modification as a result of decreasing interfacial tension and the dispersibility of modified CNFs was improved in diiodomethane. 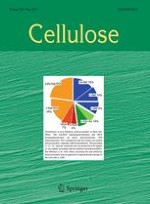