In this paper the topological derivative concept is applied in the context of compliance topology optimization of structures subject to design-dependent hydrostatic pressure loading under volume constraint. The topological derivative represents the first term of the asymptotic expansion of a given shape functional with respect to the small parameter which measures the size of singular domain perturbations, such as holes, inclusions, source-terms and cracks. In particular, the topological asymptotic expansion of the total potential energy associated with plane stress or plane strain linear elasticity, taking into account the nucleation of a circular inclusion with non-homogeneous transmission condition on its boundary, is rigorously developed. Physically, there is a hydrostatic pressure acting on the interface of the topological perturbation, allowing to naturally deal with loading-dependent structural topology optimization. The obtained result is used in a topology optimization algorithm based on the associated topological derivative together with a level-set domain representation method. Finally, some numerical examples are presented, showing the influence of the hydrostatic pressure on the topology of the structure. 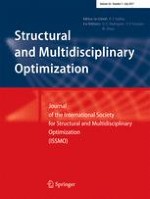