Network topology specifies the interconnections of nodes and is essential in defining the qualitative network behaviour which is known to be universal with the similar phenomena appearing in many complex networks in diverse application fields. Topology information may be uncertain, or several pieces of inconsistent topology information may exist. This paper studies a method for estimating the network topology directly from node data, and is motivated by mobile telecommunications networks (MTNs). Mutual information based dependency measure is first used to quantify the statistical node dependencies, and the topology estimate is then constructed with multidimensional scaling and distance thresholding. The topology estimate defines the graph structure of a Markov random field (MRF) model, and after model parameter identification, the MRF model can then be used e.g. in analyzing the effect of disturbances to the overall network state of MTN. The method is evaluated with MCMC generated data and is found to work in qualitative network behaviour situations that are practical from the application perspective of MTNs. With the same data, the method yields at least as good results as a typical constrained-based graph estimation method. 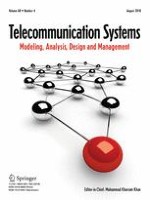 An IEEE 802.22 transceiver framework and its performance analysis on software defined radio for TV white space