This paper aims to explore the relations between Schutzian theory and hermeneutics. After presenting the connections between hermeneutic thought and Schutz’s work from a historical point of view, it will argue that despite its significant differences from hermeneutic theory, Schutzian theory can be utilized as a kind of proto-hermeneutics. By now, the heterogeneous movement of the interpretive social sciences has reached an established position, but with their growing reliance on the impulses coming from philosophical hermeneutics, the latent problem comes to the foreground: the former demand for an action-theoretical grounding has faded away. Currently, action theory itself is no more dominated by the work of interpretively minded authors, but by the theories of rational choice. This results in a false opposition between the explanatory models, which base their arguments on historical, cultural, and linguistic factors, and those, which focus on the plane of the decisions of individuals. Bypassing the objectivism present in both the rational choice approach and hermeneutics, Schutz’s pragmatic theory of the life-world, originating from both interpretive and pragmatic intellectual influences, may be useful to overcome this opposition, and can serve as a proto-hermeneutical point of departure: that is, as a theory which cannot alone take over the duty of hermeneutics, but which can complement hermeneutics on a fundamental level. 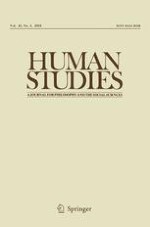 The Philosophical Anthropology of Heinrich Popitz

The Institution of Life in Gehlen and Merleau-Ponty: Searching for the Common Ground for the Anthropological Difference

Language and the As-Structure of Experience