Recent advances in networking, namely the reemergence of network programmability with a new name, that of Software-Defined Networking (SDN) have paved the way for a new approach to network datapath configuration. SDN provides an abstraction model of the forwarding plane and separates it from the control plane using open APIs. On the other hand, regarding network infrastructure, motivated by the advances of virtualization, major operators created the Network Function Virtualization (NFV) group, as an Industry Specification Group at the European Telecommunications Standards Institute. NFV’s goal is to define how network functions such as firewalls and load-balancers or any other data or control plane functionality in the mobile and fixed network, can be virtualized and run as software on high-volume servers instead of using specialized hardware. We argue that both SDN and NFV are part of a bigger networking picture, that of the complete lifecycle of the network devices and therefore could take advantage of the definition of a common abstraction model, both for the forwarding model and for the network functions. Such a model will allow interoperability and homogeneity, as well as one protocol, for control, management and orchestration of the network datapath and the network functions respectively. This paper proposes, defines and designs a reference Network Abstraction Model based on a building block approach and demonstrates an initial proof-of-concept implementation. 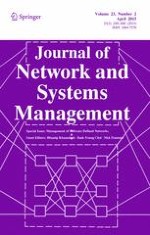 Providing Optical Network as a Service with Policy-based Transport SDN