The complexity of social-ecological systems (SES) is rooted in the outcomes of node activities connected by network topology. Thus far, in network dynamics research, the connectivity degree (CND), indicating how many nodes are connected to a given node, has been the dominant concept. However, connectivity focuses only on network topology, neglecting the crucial relation to node activities, and thereby leaving system outcomes largely unexplained. Inspired by the phenomenon of “consensus of wills and coordination of activities” often observed in disaster risk management, we propose a new concept of network characteristic, the consilience degree (CSD), aiming to measure the way in which network topology and node activities together contribute to system outcomes. The CSD captures the fact that nodes may assume different states that make their activities more or less compatible. Connecting two nodes with in/compatible states will lead to outcomes that are un/desirable from the perspective of the SES in question. We mathematically prove that the CSD is a generalized CND, and the CND is a special case of CSD. As a general, fundamental concept, the CSD can facilitate the development of a new framework of network properties, models, and theories that allows us to understand patterns of network behavior that cannot be explained in terms of connectivity alone. We further demonstrate that a co-evolutionary mechanism can naturally improve the CSD. Given the generality of co-evolution in SES, we argue that the CSD is an inherent attribute rather than an artificial concept, which underpins the fundamental importance of the CSD to the study of SES. 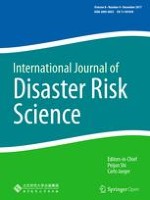 Correction to: Towards Quantitatively Understanding the Complexity of Social-Ecological Systems—From Connection to Consilience

The 4th World Landslide Forum: Landslide Research and Risk Reduction for Advancing the Culture of Living with Natural Hazards