Despite extensive research controversy remains on the effects of income inequality on economic growth. The literature proposes several transmission channels through which these effects may occur and even the existence of two different forms of inequality. However, empirical studies have not generally distinguished between these channels, nor have they considered the two forms of inequality and their separate effects on growth. In this paper, we review the theory and the evidence of the transmission channels through which inequality influences growth. We contribute to the literature by using a system of recursive equations, following a control function approach, to empirically assess the relevance of these channels and to differentiate between two forms of inequality. In a single model, we capture both a negative and a positive effect of inequality on long-run economic growth. 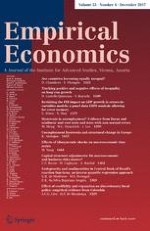 Cannabis use and support for cannabis legalization

The importance of the financial system for the real economy

Effect of credibility and reputation on discretionary fiscal policy: empirical evidence from Colombia

Hysteresis in unemployment? Evidence from linear and nonlinear unit root tests and tests with non-normal errors