Solar Energy can be used in various ways: there are solar collectors to heat water and air, photovoltaic panels that produce electricity and PVT collectors (Photovoltaic Thermal Collectors), which are basically a hybrid solution. Over recent years, much attention has been focused on an emerging solar technology: solar concentrators. These devices are used to reflect and focus solar radiation in the desired location, normally on photovoltaic cells, bringing enormous benefits because the latter continue to have a huge cost in the panels and concentrators allow a reduction in the number of cells. In this work, firstly, it is intended to make a study of photovoltaic cells, analyzing the behavior for different environ- mental factors that affect its operation: irradiance, temperature and shading. Then, a different type of concentrator is studied: triangular concentrator. Most of the analysis is made using a Software intended to simulate solar rays trajectory: Wendelin et al. (SolTrace, National Renewable Energy Laboratory (NREL), Golden, 2012). This Software allows to conclude about in which conditions it is collected the highest power in the receiver and do a comparison with another type of concentrator the parabolic concentrator where we try to understand in which months and tilts the two reflectors are more beneficial in terms of power collected by the panel. Finally, computationally results are compared with experimental results with respect to efficiencies and power collected and generated by solar panel, for a particular day of the year and for an aluminium reflector with a certain tilt and aperture. The results show that triangular reflector is a promising reflector because, with great simplicity of construction, allows higher powers than parabolic reflector, for certain times of the year. Besides, it should be noted that, for certain conditions, power collected at the bottom part of the receiver is greater than the upper part. 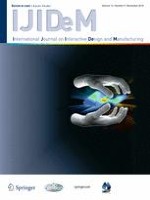 Damping properties and energy evaluation of a regenerative shock absorber

A cyber-physical system for production monitoring of manual manufacturing processes