» Jetzt Zugang zum Volltext erhalten
Wichtige Hinweise
We are grateful to the Economic and Social Research Council (ES/K010999/1) and the joint LSE-Columbia University Research Committee for funding, and to Meriem Bekka, Kim Grauer and Jennifer Reid for research assistance. The article benefited from discussion at the authors’ workshop organized by the Watson Institute (Brown University) in January 2014, and we thank the participants at the workshop, along with the journal’s reviewers, for their helpful feedback. We are also received helpful feedback from participants at LSE’s Comparative Politics/Comparative Political Economy workshop and from Shamnad Basheer. We thank Tahir Amin for his assistance in coding the applications and his suggestions on previous drafts.

This article compares national approaches towards secondary pharmaceutical patents. Because secondary patents can extend periods of exclusivity and delay generic competition, they can raise prices and reduce access to medicines. Little is known about what measures and policies countries have enacted to address applications for secondary pharmaceutical patents, how they function, and whether, in practice, these measures limit secondary patents. We analyse the cases of India and Brazil. We assemble data on pharmaceutical patent applications filed in the two countries, code each application to identify which constitute secondary applications and examine outcomes for each application in both countries. The data indicate that Brazil is less likely to grant applications than India, but in both countries, the measures designed to limit secondary patents are having little direct effect. This suggests, on the one hand, that critics of these policies, such as the transnational pharmaceutical sector and foreign governments, may be more worried than they should be. On the other hand, champions of the policies, such as NGOs and international organizations, may have cause for concern that laws on the books are not having the expected impact on patent outcomes in practice. Our findings also suggest that, at the drug level, the effects of countries’ approaches towards secondary patents need to be understood in the context of their broader approaches towards Agreement on Trade-Related Aspects of Intellectual Property Rights (TRIPS) implementation, including when and how they introduced pharmaceutical patents in the 1990s and 2000s. 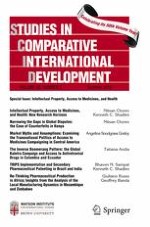 Market Myths and Assumptions: Examining the Transnational Politics of Access to Medicines Campaigning in Central America

Re-Thinking Pharmaceutical Production in Africa; Insights from the Analysis of the Local Manufacturing Dynamics in Mozambique and Zimbabwe

The Inverse Boomerang Pattern: the Global Kaletra Campaign and Access to Antiretroviral Drugs in Colombia and Ecuador

Narrowing the Gaps in Global Disputes: the Case of Counterfeits in Kenya