Two-dimensional elastica is defined as the shape of a surface into which an elastic film is deformed. In the present analysis, graphene is considered to be a plate of non-vanishing thickness and, moreover, a single-walled carbon nanotube (SWCNT) is viewed as the result of rolling up a sheet of graphene into a cylindrical tube. Therefore, when the obtained tube is subjected to bending, it can be treated as a two-dimensional elastica. In order to take into consideration the geometrical and material nonlinearities, the Lagrangian description of deformation is adopted and, in addition, a nonlinear anisotropic constitutive relation is employed that can also capture appropriately the effect of chirality of SWCNTs. By formulating the equilibrium of the corresponding two-dimensional elastica, the exact solution to the bending-induced deformation field is determined, and the exact closed-form expression for the flexural rigidity of SWCNTs is obtained. It is shown that deformation of SWCNTs in pure bending is accompanied by the warping and radial components. In addition to the exact solution, a perturbation analysis is also performed to obtain simplified approximate expressions. 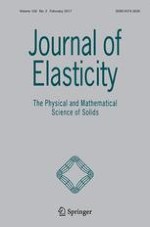 Effect of Material Nonlinearity on Spatial Buckling of Nanorods and Nanotubes

On the Role of In-Plane Compliance in Edge Wrinkling