As a primary branch of information hiding, quantum image steganography has become one of the most popular areas of study in the field of security. In this paper, the two-level embedding approach for information hiding is surveyed using an optimal least significant bit (LSB) quantum steganography algorithm, which only modifies at most one qubit of the LSBs of each pixel to perform embedding. The first level is to hide the encrypted quantum secret image into a quantum watermark image, and the second level is to embed the quantum watermark image into a quantum cover image. Using the optimal LSB-based algorithm, the double embedding can make the position of embedding have a certain randomness, thus increasing security. In addition, the quantum secret image can be reconstructed by a series of inverse operations in the recovery phase; only the stego image and the key can extract the quantum secret image. The simulated experimental results and analysis demonstrate that the proposed scheme produces images of good visual quality, robustness and high security. 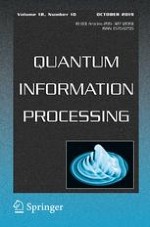 Comparing coherence measures for X states: Can quantum states be ordered based on quantum coherence?

N-qubit system in a pure state: a necessary and sufficient condition for unentanglement

Performance of a temporally multiplexed single-photon source with imperfect devices