One of the uncertainties in the field of carbon dioxide capture and storage (CCS) is caused by the parameterization of geochemical models. The application of geochemical models contributes significantly to calculate the fate of the CO2 after its injection. The choice of the thermodynamic database used, the selection of the secondary mineral assemblage as well as the option to calculate pressure dependent equilibrium constants influence the CO2 trapping potential and trapping mechanism. Scenario analyses were conducted applying a geochemical batch equilibrium model for a virtual CO2 injection into a saline Keuper aquifer. The amount of CO2 which could be trapped in the formation water and in the form of carbonates was calculated using the model code PHREEQC. Thereby, four thermodynamic datasets were used to calculate the thermodynamic equilibria. Furthermore, the equilibrium constants were re-calculated with the code SUPCRT92, which also applied a pressure correction to the equilibrium constants. Varying the thermodynamic database caused a range of 61% in the amount of trapped CO2 calculated. Simultaneously, the assemblage of secondary minerals was varied, and the potential secondary minerals dawsonite and K-mica were included in several scenarios. The selection of the secondary mineral assemblage caused a range of 74% in the calculated amount of trapped CO2. Correcting the equilibrium constants with respect to a pressure of 125 bars had an influence of 11% on the amount of trapped CO2. This illustrates the need for incorporating sensitivity analyses into reaction pathway modeling. 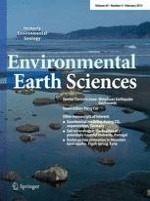