Inorganic fullerene-(IF)-like nanoparticles made of metal dichalcogenides (IF-MoS2, IF-WS2) have been known to be effective as anti-wear and friction modifier additives under boundary lubrication. The lubrication mechanism of these nanoparticles has been widely investigated in the past and it is now admitted that their lubrication properties are attributed to a gradual exfoliation of the external sheets of the particles during the friction process leading to their transfer onto the asperities of the reciprocating surfaces. However, the chemical interaction between these molecular sheets and the rubbing surfaces has so far never been investigated in detail. In this study, the tribochemistry of the IF nanoparticles was carefully investigated. A series of friction test experiments on different rubbing surfaces (Steel, Alumina, Diamond-Like Carbon) were performed with IF-MoS2 nanoparticles. High-resolution transmission electron microscopy, scanning electron microscopy, Auger electron spectroscopy, and X-ray photoelectron spectroscopy were used to characterize the tribostressed areas on rubbing surfaces. A tribofilm composed of hexagonal 2H-MoS2 nanosheets was only observed on the steel surface. This transfer film was found to be incorporated into an iron oxide layer. A tribochemical reaction between the 2H-MoS2 nanolayers and the iron/iron oxide has been proposed as an explanation for the adhesion of this tribofilm. The tribochemical mechanism of the IF-MoS2 nanoparticles is discussed in this article. 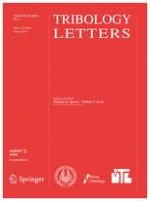 In Situ Studies of Cartilage Microtribology: Roles of Speed and Contact Area