This paper examines the dynamics of the relationships found within existing networks in informal recycling in Kaduna, Nigeria. Special attention is paid to power relations. Informal recycling is a major livelihood activity in cities in the south. Beyond the poverty perspective, the nature of informal recycling makes it an appropriate tool to use to capture the complexity and dynamism of social relations and power within networks. It consists of a variety of interrelated activities performed by different groups. The deep interconnections and interdependences necessitate the formation of networks. Drawing on empirical data, the paper reports that the networks found in Kaduna span the household, community, city, and intercity levels. The relations are informal but, in many cases, well structured. Crucially, the paper reveals that the networks are characterized by dependent relations. Those with greater access to financial and social capitals drive the system and play a greater role in shaping network rules and relations. However, no single actor or group has a monopoly on power. The interdependences mean that the different groups rely on each other, and power becomes much more diffused. Furthermore, network relations are embedded in specific sociocultural contexts. Age and gender are identified as crucial determinants in the dynamics of power and bargaining. The paper argues for a recognition of the diversity and inherent complexity of social networks and the adoption of an analytical approach that is more sensitive to the positionality and power of actors than that found in traditional “social capitalist” analysis. 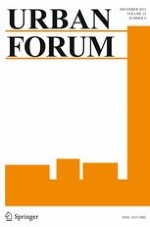 “We Are Good at Surviving”: Street Hustling in Addis Ababa's Inner City

Urban Governance Beyond the State: Practices of Informal Urban Regulation in the City of Goma, Eastern D.R. Congo

Inside the System, Outside the Law: Operating the Matatu Sector in Nairobi