The need to increase the precision with which the form of the pulse of the rapidly varying current of powerful plasma radiation is recorded under the conditions of powerful electromagnetic induction is considered. It is suggested that that a polarimetric fiber-optic current sensor based on a Spun-type light guide should be used to record powerful pulsed discharges. With the use of this type of current sensor it becomes possible to implement a technique of recording powerful pulse discharges of a plasma radiator in a regime of time profiling of the current pulse of two high-voltage capacitative storage devices with total energy up to 1800 kJ. The discharge chamber, power circuit, and evolution of the plasma discharge are described. The design and operating principle of a prototype of a two-pass polarimetric fiber-optic sensor with Spun-type optical cable and Faraday compensator that exhibits mutual optical anisotropy are presented. The general scheme of current measurements and the calibration circuit of the sensor are presented and experience gained from the use of a prototype of a sensor for measurement of powerful current pulses is described. Features of pre-calibration of the sensor are discussed. Results of a measurement of current by optical and traditional methods of recording based on the use of a Rogowski coil and Hall sensors are compared and a significant increase in the precision of reproduction of the shape of the current pulse by the optical method of recording is noted. Different modes of modernization of a fiber-optic sensor for expanding the range of recording current are considered.
Anzeige
Vorheriger Artikel Determination of Spray Droplet Size by Wavelet Analysis of Interferometric Images
Nächster Artikel Relationship of the Optical Density Parameters of a Sample and its Absorptivity 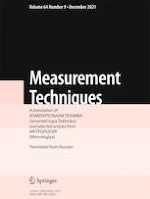 Experimental Determination of the Compressibility Factor of Natural Gas: Methods and Results