As a neural network provides a non-linear function mapping of a set of input variables into the corresponding network output, without the requirement of having to specify the actual mathematical form of the relation between the input and output variables, it has the versatility for modeling a wide range of complex non-linear phenomena. In this study, groundwater contamination by nitrate, the ANNs are applied as a new type of model to estimate the nitrate contamination of the Gaza Strip aquifer. A set of six explanatory variables for 139 sampled wells was used and that have a significant influence were identified by using ANN model. The Multilayer Perceptrons (MLP), Radial Basis Function (RBF), Generalized Regression Neural Network (GRNN), and Linear Networks were used. The best network found to simulate Nitrate was MLP with six input nodes and four hidden nodes. The input variables are: nitrogen load, housing density in 500-m radius area surrounding wells, well depth, screen length, well discharge, and infiltration rate. The best network found had good performance (regression ratio 0.2158, correlation 0.9773, and error 8.4322). Bivariate statistical test also were used and resulting in considerable unexplained variation in nitrate concentration. Based on ANN model, groundwater contamination by nitrate depends not on any single factor but on the combination of them. 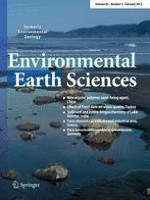 On the value of dolines in gypsum terrains as a “Geological Heritage”: an example from Sivas basin, Turkey

Bioavailability of arsenic in the soil horizon: a laboratory column study