Cerium oxide is a principal component in many heterogeneous catalytic processes. One of its key characteristics is the ability to provide or remove oxygen in chemical reactions. The different crystallographic faces of ceria present significantly different surface structures and compositions that may alter the catalytic reactivity. The structure and composition determine the number of coordination vacancies surrounding surface atoms, the availability of adsorption sites, the spacing between adsorption sites and the ability to remove O from the surface. To investigate the role of surface orientation on reactivity, CeO2 films were grown with two different orientations. CeO2(100) films were grown ex situ by pulsed laser deposition on Nb-doped SrTiO3(100). CeO2(111) films were grown in situ by thermal deposition of Ce metal onto Ru(0001) in an oxygen atmosphere. The chemical reactivity was characterized by the adsorption and decomposition of various molecules such as alcohols, aldehydes and organic acids. In general the CeO2(100) surface was found to be more active, i.e. molecules adsorbed more readily and reacted to form new products, especially on a fully oxidized substrate. However the CeO2(100) surface was less selective with a greater propensity to produce CO, CO2 and water as products. The differences in chemical reactivity are discussed in light of possible structural terminations of the two surfaces. Recently nanocubes and nano-octahedra have been synthesized that display CeO2(100) and CeO2(111) faces, respectively. These nanoparticles enable us to correlate reactions on high surface area model catalysts at atmospheric pressure with model single crystal films in a UHV environment. 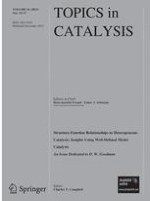 Towards the Understanding of Sintering Phenomena at the Nanoscale: Geometric and Environmental Effects

Investigations of Structure Sensitivity in Heterogeneous Catalysis: From Single Crystals to Monodisperse Nanoparticles

Electronic Metal–Support Interactions and the Production of Hydrogen Through the Water-Gas Shift Reaction and Ethanol Steam Reforming: Fundamental Studies with Well-Defined Model Catalysts