» Jetzt Zugang zum Volltext erhalten
The fish protection and the passability at hydro power stations with trash racks with horizontal bars, arranged at an angle to the direction of the flow, called inclined screens, is a proved solution. On the basis of scientific laboratory and field tests the hydraulic losses, the screens losses, of inclined screens were identified as well as the hydraulic and stream signatures which were generated by the screens. The inclined screen effect of protection and guiding was detected by ethohydraulic studies with salmon smolts and eels and varying screens parameters. 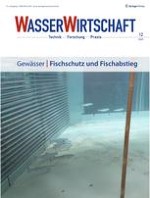