Recent discrete fracture network (DFN) related analysis of a number of block caving projects has demonstrated the role that the 3D volumetric fracture intensity measure (P32) plays on controlling a number of rock mass properties critical to caving operations. P32 represents the fracture area per unit volume and as such represents a non-directional intrinsic measure of the degree of rock mass fracturing, incorporating both a frequency measure and a fracture size component. Preliminary results suggest that the P32 intensity of a DFN model would strongly control the overall fragmentation of the rock mass. The implication would be that by taking the overall distribution of P32, the in situ fragmentation of a large rock mass volume could be determined in a computationally efficient way. With P32 also being shown to be one of the dominant controls on DFN derived directional stiffness measures, increasingly these DFN related work flows are being shown to be central to an improved rock mass characterisation process and ultimately the more accurate capturing of the caving process. 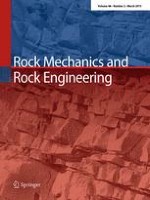 Experimental Study on the Water-Induced Weakening of Calcarenites

A Rigid Particle Model for Rock Fracture Following the Voronoi Tessellation of the Grain Structure: Formulation and Validation