Ionic liquids (ILs) have been recently proposed as carrier for magnetorheological (MR) fluids. Their special properties, such as very low vapor pressure and high thermal stability, make ILs highly suitable dispersion media to increase the broad range of technological applications that magnetorheological fluids already have. It has been just reported that using ILs as carriers in MR fluids an improvement in the colloidal stability and suspension redispersibility is obtained. In this work, the magnetorheological behavior of highly concentrated suspensions in ILs is studied. Two kinds of suspensions were analyzed: using an ionic liquid of low conductivity and a mineral oil as carriers. In both cases, silica-coated iron microparticles were used as solid phase, being the solid volume concentration of 50% vol. A complete magnetorheological analysis focused on the wall slip phenomenon was performed. Steady-state and oscillatory experiments were carried out. In order to study wall slip effects, all experiments were performed with a plate–plate system, using both smooth and rough measuring surfaces. A significant effect of wall slip was observed when the experiments were performed using smooth surfaces. The novelty of this paper is mainly based on (1) the use of an ionic liquid as carrier to prepare magnetic suspensions, and (2) the analysis of wall slip phenomena in MR fluids with a particle content close to the maximum packing fraction. 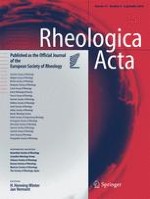 On the viscoelastic characterization of the Jeffreys–Lomnitz law of creep