The use and production of biofuels have been strongly promoted in Thailand. In order to achieve a 25 % renewable energy target in 2021, feedstock expansion is needed to satisfy the increased demand for biofuel production putting more pressure on freshwater resources. This is an important implication of biofuel production which has not yet been taken into consideration. Thus, this study intends to address the impact from freshwater use due to the biodiesel target based on life cycle assessment approach as well as to evaluate suitable areas for expansion of oil palm.

The amount of water for growing oil palm throughout its lifespan is estimated based on theoretical crop water requirement, while water demand for producing biodiesel is referred to from literature. Then, the potential impact on freshwater resources is assessed in terms of water deprivation using the water stress index of Thailand. The Alternative Energy Development Plan for 2012–2021 and areas recommended by the Ministry of Agriculture and Cooperatives are referred in this study. Additionally, two scenarios for increasing new plantation in suitable areas are proposed as expansion in a single region or spread over the three regions.

The highest water requirement for oil palm-based biodiesel production is found in the central region followed by the eastern and southern (4–9, 5–16, and 4–19 m3 L−1 biodiesel, respectively). This is because oil palm plantations in the central region are not yet fully mature. As a result, the ratio of crop water requirement associated to crop productivity will be reduced while the water productivity will be increased yearly in yield. Also, more than 99 % of the total water is required during the cultivation period. To achieve the 2021 biodiesel target with a concern towards the impact from freshwater use by means of low water deprivation, cultivating oil palm is recommended entirely in the eastern and the southern parts without expansion to the central region.

The impact on freshwater resources is an important implication of biofuel production as most of the water requirement of palm oil biodiesel was for oil palm cultivation. Accounting the water deprivation as one of the criteria on impact from freshwater use will provide useful support for selecting areas having less potential for inducing water stress in a watershed leads to people in these areas being less vulnerable to water stress. 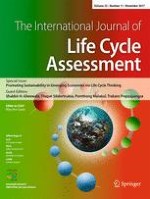 Life cycle assessment in the furniture industry: the case study of an office cabinet