Propagation of elastic waves in discontinuous media is studied in this paper by the scattering matrix method (SMM). An electromagnetic transmission line analogy is also used to set up the mathematical model. The SMM operates in the frequency domain and allows for all wave polarizations (P, SV and SH). Rock masses are examples of discontinuous media in which the discontinuities (fractures or joints) influence wave propagation. Both elastic and viscoelastic joints are considered and the latter are described by Kelvin–Voigt, Maxwell and Burgers models. Rock joints with Coulomb slip behavior are also analyzed, by applying the averaging principle of Caughy (J Appl Mech 27:640–643, 1960). The evaluation of the effects of periodic discontinuities in a homogeneous medium is presented by introducing the concept of Bloch waves. The dispersion curves of these waves are useful to explain the existence of frequency bands of strong attenuation, also in the case of lossless (perfectly elastic) structures. Simple expressions of transmission and reflection coefficients are obtained. Finally, the SMM results are compared with those computed via the distinct element method (DEM). The comparisons are performed on a medium with joints with Coulomb slip behavior and the agreement is satisfactory, although the SMM must be applied in conjunction with the equivalent linearization technique. Even if the DEM is much more general, the SMM in these simple cases is extremely faster and provides a higher physical insight. 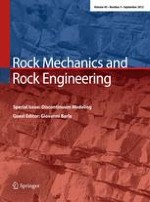