Integrating culture into the behavioural models of virtual characters requires knowledge from very different disciplines such as cross-cultural psychology and computer science. If culture-related behavioural differences are simulated with a virtual character system, users might not necessarily understand the intent of the designer. This is, in part, due to the influence of culture on not only users, but also designers. To gain a greater understanding of the instantiation of culture in the behaviour of virtual characters, and on this potential mismatch between designer and user, we have conducted two experiments. In these experiments, we tried to simulate one dimension of culture (Masculinity vs. Femininity) in the behaviour of virtual characters. We created four scenarios in the first experiment and six in the second. In each of these scenarios, the same two characters interact with each other. The verbal and non-verbal behaviour of these characters differs depending on their cultural scripts. In two user perception studies, we investigated how these differences are judged by human participants with different cultural backgrounds. Besides expected differences between participants from Masculine and Feminine countries, we found significant differences in perception between participants from Individualistic and Collectivistic countries. We also found that the user’s interpretation of the character’s motivation had a significant influence on the perception of the scenarios. Based on our findings, we give recommendations for researchers that aim to design culture-specific behaviours for virtual characters.

Titel
‘What I see is not what you get’: why culture-specific behaviours for virtual characters should be user-tested across cultures
Autoren:
Nick Degens
Birgit Endrass
Gert Jan Hofstede
Adrie Beulens
Elisabeth André 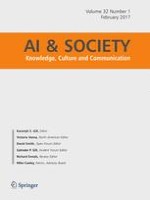 Construction of national identity through a social network: a case study of ethnic networks of immigrants to Russia from Central Asia