Although the negative effects of mobile instant messaging have been stressed, its exponential increment justifies studying its application in education. This paper analyses whether college’ students perception of WhatsApp usefulness influences cognitive processes important for teamwork (i.e., specialization and coordination), specifically for complex decision-making assignments. Additionally, it seeks to clarify to what extent the relationship between perception of WhatsApp usefulness and these cognitive processes could exert some influence on team efficacy, both perceived and objective (grades). For that purpose, a role-play was specifically designed in which WhatsApp played a mayor function as a communication tool. A sample of university students (N = 200) worked in teams to reach decisions. A student in each team was set apart all team members could only communicate through WhatsApp. Findings confirm the relationships between perceived WhatsApp usefulness and specialization and coordination, as well as perceived WhatsApp usefulness and perceived team efficacy. Both the role-play case designed and results obtained are relevant since show that WhatsApp could be applied as a communication tool in team activities, due to the fact that the perception of its usefulness could help to develop positive attitudes towards teamwork (i.e., team perceived efficacy). From an applied perspective WhatsApp could be used for virtual teamwork through, for example, the proposed role-play case shown. 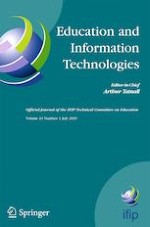 Student views on the use of flipped learning in higher education: A pilot study