The article discusses the empirical finding that a different treatment of small and large municipalities in the German Census 2011 results in systematic discrepancies of census counts and counts from the population offices. Here for municipalities with more than 10000 inhabitants the census counts result on average in 1.5 percentage points less than the corresponding register counts. This result of Christensen is re-analyzed with a semi-parametric setting separately for each German federal state. For three states the above effect of the sampling method cannot be replicated.
The article investigates the question why such a general methodological effect does not show-up in three states. It is shown that reasonable arguments indicate that the local registration offices of these states are run more effectively than in the other federal states. Under this perspective the census sampling routine discovers systematic lacks of the population registers, while on the other hand the unsystematic clearing option which is applied to the small municipalities does not discover such deficiencies. Therefore the large municipalities should not complain about the sampling method as the revealed differences of census and register counts should be attributed to imprecise register counts. However, one could argue that the clearing procedure which is applied to the small municipalities gives on average too optimistic population sizes.
Finally, the analysis is replicated for the census 1987 in Bavaria which was entirely interviewer-based with no distinction between small and large municipalities at the 10000 inhabitants limit.

Titel
Why the sampling method of the German Census does not discriminate the large municipalities: a detective story
Autor:
Ulrich Rendtel 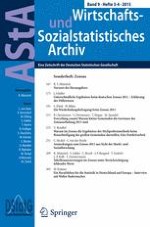