This paper compares the life satisfaction and working hours of Latin Americans and U.S. Americans using the AmericasBarometer and General Social Survey. While there are many common determinants of happiness, hours worked is not among them. Differences in cultural values, especially the distinction between collectivism (familism) and individualism that has long been a foundation of social development theory, may be why married Latin American males are less happy than married U.S. American males when working longer hours. The distinction is not apparent among females or the unmarried. 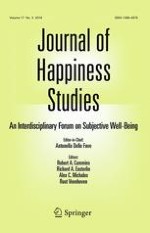 When Are People Unhappy? Corruption Experience, Environment, and Life Satisfaction in Mainland China

Savoring with Intent: Investigating Types of and Motives for Responses to Positive Events

Wellbeing as a Wicked Problem: Navigating the Arguments for the Role of Government

Building Life Satisfaction Through Well-Being Dimensions: A Longitudinal Study in Children with a Life-Threatening Illness

Construct Overlap Between Employee Engagement and Job Satisfaction: A Function of Semantic Equivalence?