Would being driven by others affect the value of travel time? Ridehailing as an analogy for automated vehicles | springerprofessional.de Skip to main content
TOOLBAR 1 2 3 4
SUCHE MENÜ 1 2 3 4

It is widely believed that vehicle automation will change how travelers perceive the value of travel time (VoTT), but the magnitude of this effect is still unknown. This study investigates how highly automated vehicles (AVs) may affect VoTT, using an existing mode—ridehailing services (RHS)—as an analogy for AVs. Both AVs and RHS relieve travelers from the effort of driving and allow them to participate in other activities while traveling. In a stated choice experiment, respondents chose between driving a personal vehicle or taking an RHS, with each mode characterized by a cost and travel time. Analysis results using a mixed logit model indicated that the VoTT was 13% lower when being driven in an RHS than when driving a personal car. We also told half the respondents (randomly selected) that the RHS was driverless; and for half (also randomly selected) we explicitly mentioned the ability to multitask while traveling in an RHS. Mentioning multitasking explicitly led to a much lower VoTT, approximately half that of driving oneself. However, the VoTT in a driverless RHS was 15% higher than when driving a personal car, which may reflect a lack of familiarity and comfort with driverless technology at present. These results suggest sizable reductions in VoTT for travel in future AVs, and point to the need for caution in making forecasts based on consumers’ current perceptions of AV technology.

Titel
Would being driven by others affect the value of travel time? Ridehailing as an analogy for automated vehicles
Autoren:
Jingya Gao
Andisheh Ranjbari
Don MacKenzie 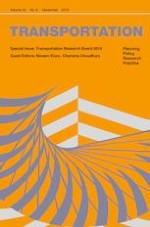 Acceptance of disincentives to driving and pro-environmental transport intentions: the role of value structure, environmental beliefs and norm activation

Effects of neighborhood environments on perceived risk of self-driving: evidence from the 2015 and 2017 Puget Sound Travel Surveys