Fintan O’ Toole, We Don’t Know Ourselves: A Personal History of Ireland Since 1958 | springerprofessional.de Skip to main content
SEARCH MENU 1 2 3 4

In the summer of 1972, the renowned Irish historian, F.S.L. Lyons, was finishing revisions of the second edition of his survey, Ireland Since the Famine, which would become the standard text for the first generation of Irish schoolchildren entitled to free secondary education. Lyons’s book was the synthesis of scholarship produced by the mid-century historiographical revolution which challenged the robustly patriotic history taught in the Irish state since independence from Britain in 1922. In careful, elegant prose—and a proclivity for French phrases—he sought to complicate the Irish story as the narrative of a people striving to be free for centuries, highlighting nuance and ironies in the relationship with the colonising power next door. Restraint and caution were his watchwords for a task he considered a form of intellectual liberation. Given that the troubles in Northern Ireland were now attracting worldwide attention, Lyons felt he needed to “sail into the eye of the hurricane” by addressing contemporary history including not just the history of Northern Ireland since partition but also the development of the southern state after independence and the civil war. Towards the end of the book, touching on recent history in the Republic of Ireland, Lyons’s restrained tone shifts to one of almost wonderment. Anyone who had been out of Ireland for only five years in the recent past, as Lyons himself had been, would, he wrote, have experienced the same discomfiture as Rip Van Winkle discovering that he had missed the American revolution during his twenty-year sleep. “In part the change is visible and material – more factories, more office-blocks, new housing estates, better kept country cottages, an absence of barefoot children, a presence of supermarkets, television sets and family cars. But the change is more than just the emergence of a consumer society . . . It is something impalpable and impossible to measure – a change of attitude, perhaps a change of heart. One can best describe it as a sense of new life and vigour, a stirring of hope, even a belief that the future will be better than the past has ever been.” (Lyons, 1973, p 633). …
Advertisement
previous article Book Reviews
next article Sergei Guriev and Daniel Treisman, Spin Dictators: The Changing Face of Tyranny in the 21st Century 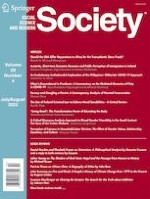 Michael Rosen, The Shadow of God: Kant, Hegel, and the Passage from Heaven to History

A Critical Discourse Analysis Approach to Mixed-Gender Friendship in the Saudi Context: The Case of the Twitter Platform