Luxor, the modern Egyptian city that occupies the site of ancient Thebes, is famed for its magnificent ancient monuments. Since 1967, the Aswan high dam has prevented the annual flooding of the Nile River, resulting in excessive salt accumulation on the Nile floodplains and on exposed monument surfaces. In addition, the expansion of agricultural land within the Luxor study area has resulted in increased salinity and groundwater level. These conditions accelerate the degradation of buried and exposed monuments that were fairly well preserved in the past. To mitigate this problem, it is necessary to first understand the near-surface setting and the groundwater conditions of the Luxor area. A geophysical investigation was carried out using resistivity and electromagnetic surveys. In addition, a chemical analysis was conducted of some surface water samples collected from canals and the sacred lake of Memnon Temple. Based on the results of the geophysical surveys and the chemical analysis of the water samples, the shallow subsurface was characterized into four geoelecterical units. Groundwater flow directions were determined to be from the central area to the west, causing a rise in the groundwater levels and groundwater salinity in the area of monuments. 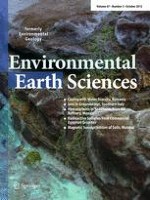