Create an alert for Empirical Software Engineering now and receive an email for each new issue with an overview and direct links to all articles.

In order that the general public is not vulnerable to hackers, security bug reports need to be handled by small groups of engineers before being widely discussed. But learning how to distinguish the security bug reports from other bug reports is challenging since they may occur rarely. Data mining methods that can find such scarce targets require extensive optimization effort.

The goal of this research is to aid practitioners as they struggle to optimize methods that try to distinguish between rare security bug reports and other bug reports.

Our proposed method, called SWIFT, is a dual optimizer that optimizes both learner and pre-processor options. Since this is a large space of options, SWIFT uses a technique called 𝜖-dominance that learns how to avoid operations that do not significantly improve performance.

When compared to recent state-of-the-art results (from FARSEC which is published in TSE’18), we find that the SWIFT’s dual optimization of both pre-processor and learner is more useful than optimizing each of them individually. For example, in a study of security bug reports from the Chromium dataset, the median recalls of FARSEC and SWIFT were 15.7% and 77.4%, respectively. For another example, in experiments with data from the Ambari project, the median recalls improved from 21.5% to 85.7% (FARSEC to SWIFT).

Overall, our approach can quickly optimize models that achieve better recalls than the prior state-of-the-art. These increases in recall are associated with moderate increases in false positive rates (from 8% to 24%, median). For future work, these results suggest that dual optimization is both practical and useful.
Advertisement
previous article Testing self-healing cyber-physical systems under uncertainty with reinforcement learning: an empirical study
next article Flair: efficient analysis of Android inter-component vulnerabilities in response to incremental changes 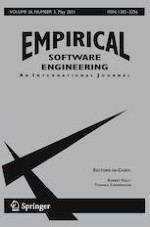 A comprehensive study of bloated dependencies in the Maven ecosystem

A family of experiments on test-driven development

Correction to: Wait for it: identifying “On-Hold” self-admitted technical debt

Revisiting the VCCFinder approach for the identification of vulnerability-contributing commits