Create an alert for Quality of Life Research now and receive an email for each new issue with an overview and direct links to all articles.

Value-based healthcare is an upcoming field. The core idea is to evaluate care based on achieved outcomes divided by the costs. Unfortunately, the optimal way to evaluate outcomes is ill-defined. In this study, we aim to develop a single, preference based, outcome metric, which can be used to quantify overall health value in inflammatory bowel disease (IBD).

IBD patients filled out a choice-based conjoint (CBC) questionnaire in which patients chose preferable outcome scenarios with different levels of disease control (DC), quality of life (QoL), and productivity (Pr). A CBC analysis was performed to estimate the relative value of DC, QoL, and Pr. A patient-centered composite score was developed which was weighted based on the stated preferences.

We included 210 IBD patients. Large differences in stated preferences were observed. Increases from low to intermediate outcome levels were valued more than increases from intermediate to high outcome levels. Overall, QoL was more important to patients than DC or Pr. Individual outcome scores were calculated based on the stated preferences. This score was significantly different from a score not weighted based on patient preferences in patients with active disease.

We showed the feasibility of creating a single outcome metric in IBD which incorporates patients’ values using a CBC. Because this metric changes significantly when weighted according to patients’ values, we propose that success in healthcare should be measured accordingly.
Advertisement
previous article Long-term health status as measured by EQ-5D among patients with metastatic breast cancer: comparison of first-line oral S-1 and taxane therapies in the randomized phase III SELECT BC trial
next article Mapping painDETECT, a neuropathic pain screening tool, to the EuroQol (EQ-5D-3L) 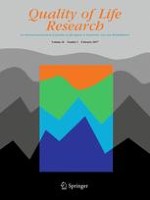 Determinants of quality of life in community-dwelling older adults: comparing three cut-offs on the excellent-to-poor spectrum

Depression risk in patients with late-onset rheumatoid arthritis in Germany

Development and validation of the Patient Experience with Treatment and Self-management (PETS): a patient-reported measure of treatment burden

Expectations of younger patients concerning activities after knee arthroplasty: are we asking the right questions?