Create an alert for WASSERWIRTSCHAFT now and receive an email for each new issue with an overview and direct links to all articles.

Currently, hydropower is only of minor importance for the energy sector in Israel. However, in the process of transforming the energy sector with focus on solar power, hydropower is expected to support the expansion of this intermittent energy source in the future. Supplying Lake Tiberias, which lies on an altitude below the sea level, with desalinated seawater could synergistically combine both efforts. In this context, the present study analyses the seawater-driven hydropower potential at Lake Tiberias. The analysis of the hydropower potential at Lake Tiberias shows, that the potential energy between the coast and the lake could be used to produce substantial amounts of electricity. A hydropower plant at Lake Tiberias could thus recover 11-16 % of the energy used by the desalination plant. In addition, the coordination of the hydropower plant with other energy sources like photovoltaic could optimize the usage of the electrical energy produced. Regarding the economic feasibility, only the investment costs of the hydropower plant would be accrued as the tunnel would be already in place to supply the lake.
Advertisement
previous article Evaluierung von Transfersystemen zur Wasserversorgung von Jordanien und Palästina
next article Techno-ökonomische Analyse integrierter Wasserinfrastrukturprojekte 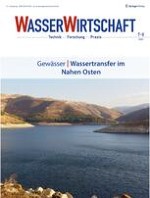