The self-heating of wood fuel pellets is a well-recognised problem causing fire incidents in the storage of the pellets as well as severe intoxication of workers by elevated carbon monoxide and carbon dioxide levels and oxygen depletion. Possible factors contributing to the self-heating are considered to be autoxidation and microbiological activity, while the role and contribution to the temperature rise caused by the heat of condensation from water vapour condensing during fast changes in the relative air humidity is less investigated. Using Dynamic Vapour Sorption, the water uptake was measured at 25 °C when increasing the RH from 40 to 80% using 35 fuel pellet samples covering a broad variation in pellet raw materials and process equipment found in Europe (both pilot and industrial scale). The equilibrium total water uptake and speed of the uptake were determined. Total water uptake was 4.56% (range 3.69–6.86%) with no systematic difference found related to the scale of production (industry as compared to pilot plant). In addition, the variations within larger groups of raw material (pine, spruce and pine/spruce mixtures) were relatively small, and the mean water uptake did not differ significantly between these groups. An estimation of the overall potential heat release (when raising the RH% from 40 to 80%) made from the experimental results, taking the early fast water uptake process into consideration (2 h counting for half the total uptake), showed that a heat release of 47 kJ/kg of pellets (range 12–63 kJ/kg) and a potential temperature increase of 45 °C is possible. This estimation clearly demonstrates that the heat of condensation released during water condensation in a pellets silo or in a pellets pile should be expected to be a major contributing factor to initiating temperature rise incidents. In addition, such a temperature increase is expected to assist the initiation of, and to increase the speed of autoxidation of fatty acids and other compounds in the material that will further contribute to a temperature rise. Thus, the results in this study have the potential to improve the basis for modelling the self-heating process in pellet silos/storage and to predict the status of a certain pellet batch by presenting a broad basis for expected variation in the important parameters (specific heat capacity CP and thermal conductivity λeff) influencing the process, and thus aid in taking preventive actions like venting or shifting the pellets to another silo/pile to reduce risk for self-heating and possible fire. 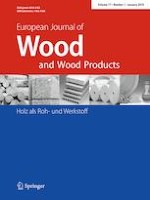 Medium density boards made of groundwood fibres: an analysis of their mechanical and physical properties