Motivated by the teleportation of hyper-entangled states, a high capacity quantum weak blind signature (QWBS) scheme is developed via logistic chaotic maps. Three participants jointly accomplish the task in two degrees of freedom entangled system process. Alice blinds the two copies of each state via a chaotic quantum blinding algorithm, using the initial keys shared by Bob. Charlie and Alice provide private and public signatures, while Bob verifies the authenticity by comparing both the blinded and original messages. Unlike previous schemes, the proposed QWBS scheme is immune to internal counterfeiting attacks that can be applied after signing. Analysis shows that the scheme ensures a blind signature while maintaining sender traceability with the help of a trusted signatory in the three-sided cooperative mechanism. This QWBS protocol has the advantage of having a higher capacity than the protocols with a qubit system. It has a wide application for online electronic transaction systems. 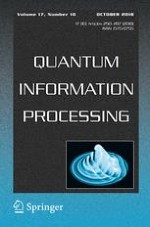 State transfer with quantum side information