Create an alert for Journal of Nonverbal Behavior now and receive an email for each new issue with an overview and direct links to all articles.

Using vignettes and online photos, this study explored the relationship between touch intimacy, biological sex, attachment, and the experience of jealous emotions in the context of seeing one’s partner touch a close, opposite-sex friend. Results indicated that hypothetical scenarios elicited significant emotional responses and increases in touch intimacy (as depicted in digital photos) heightened these responses. Males indicated more sexual arousal when seeing their partners interacting with a friend, while females indicated more sadness, fear, and envy. In terms of attachment, preoccupied individuals expressed the most anger and fear, dismissives and secures expressed the least envy and embarrassment, dismissives expressed the least fear, and fearfuls expressed the most sexual arousal. The two forms of touch (face touch and lower back touch) elicited stronger jealous emotions (anger, sadness, fear, and embarrassment) than no touch. Lastly, in regards to lower back touch, fearfully attached males responded with the most fear, females with the most anger, sadness, fear, and envy, and fearfully attached individuals the least amount of fear. This occurred despite the fact that face touch was characterized as more intimate than lower back touch; our results suggest that this form of touch may have been perceived as sexual. We relate our findings to the context of viewing digital photos on social networking websites. 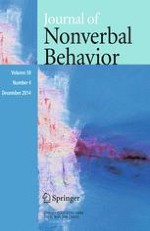 Nonverbal Decoding on Facebook: Applying the IPT-15 and the SSI to Personality Judgments