In the present study, the forming behavior of veneer with nonwoven backings was analyzed. The paper contributes to the lack of data on numerical predictions of the formability of veneers for the manufacturing of automotive trim parts. Tensile and shear tests were carried out at normal climate conditions and after water immersion to obtain material parameters for a transverse isotropic material description. The Tsai Wu failure criterion was applied to the estimation of strength under different stress combinations. Analysis of the directional deep drawing capacity of the veneer laminate was done by the Nakajima test. Stress states from biaxial to uniaxial were induced into the material depending on the geometry of the sample. Strains were evaluated locally until material failure using the digital image correlation method. Major strain was defined in the direction perpendicular to the grain. Increasing major strain was found from biaxial to uniaxial stress states. Highest strain limits were found for wet veneers tested with heated forming tools. Cracks occurred in the early wood zone for all geometries and propagated in the direction parallel to the grain. Generally, the Nakajima test is suitable for the evaluation of the formability of veneer laminate sheets. The presented data and, in general, the suggested experimental program can be used for the development and validation of veneer laminate material models for forming simulations. 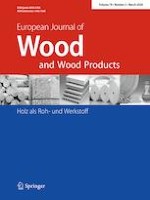