Create an alert for Sexuality Research and Social Policy now and receive an email for each new issue with an overview and direct links to all articles.

While rates of sexual activity among adolescents have declined, they remain high among adolescents living in poverty. Risky sexual behaviors are often compounded, placing adolescents at greater risk for increased prevalence of sexual behaviors during later adolescence and other behaviors that may compromise later life chances. Sexual immaturity may influence sexual initiation and trajectories of sexual behavior. In the current study, using a growth curve framework, data from the Mobile Youth and Poverty Study are used to model how sexual immaturity develops across adolescence as a function of age, gender, and sex education. Results suggest that girls are less sexually immature than boys, regardless of exposure to school-based sex education. For girls, sexual immaturity trajectories were similar throughout adolescence. However, during early adolescence, boys receiving school-based sex education had more immature sexual beliefs than those who had not. By middle adolescence, these differences had disappeared, and by late adolescence, boys receiving sex education had more mature attitudes boys who had not. Our results suggest that school-based sex education curricula should take into consideration how sexual maturity is portrayed among adolescents, particularly those who live in impoverished communities.
Advertisement 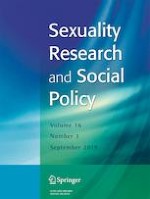 Improving the Health of Cisgender Men Who Identify as Bisexual: What Do They Want from Interventions?

Associations between Perceived Homophobia, Community Connectedness, and Having a Primary Care Provider among Gay and Bisexual Men

Women in Sex Work and the Risk Environment: Agency, Risk Perception, and Management in the Sex Work Environments of Two Mexico-U.S. Border Cities