Orthogonal frequency division multiplexing (OFDM) is considered as one of the most significant transmission methodologies of the recent past. Moreover, it permits easy demodulation and modulation. To find the new OFDM-based waveform to be used in fifth generation which is one of the foremost open issues for wireless networks of the next generation. In addition, the OFDM is affected by the maximum Peak-to-Average Power Ratio (PAPR). In order to minimize these problems, this paper proposed a Twin Symbol Hybrid Optimization used as a basis of the Partial Transmit Sequence (TSHO-PTS) method of Cyclic Prefix-OFDM (CP-OFDM). This CP-OFDM achieves the requirements of 5G telecommunication standards. Moreover, the exhaustive searching for optimal phase factors might increase the computational cost of PTS. To beat this problem, a hybrid version of slap swarm optimization (SSO) and Bald Eagle Search (BES) algorithm is introduced to investigate the phase factor optimally by the PTS method. Digital chaotic sequences are used to ensure the physical layer security during the data transmission scheme for the Discrete Fourier Transform Spread OFDM (DFT-S-OFDM) subcarrier allocation. The simulation takes place in the MATLAB platform, and the performances are evaluated by several performance metrics like Complementary cumulative distribution function (CCDF), Bit Error Rate (BER), and computational complexity. The performance of the proposed model is compared with various existing approaches and previous works. From the implemented results, the proposed strategy achieved less (5 dB) PAPR, minimum (10–8) BER, less processing time (0.18 s) than the existing schemes, and hence the complexity also very low (7%) than others.
Advertisement
previous article Research on dynamic handover decision algorithm based on fuzzy logic control in mobile FSO networks
next article Investigation on effects of system parameters on transmission depth in underwater wireless optical communication 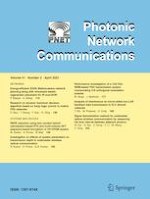